It is a well-renowned fact that nowadays around 90% of world trade is carried out through the shipping industry. It thus follows that this same industry is characterised by vast intricacies as well as by a large amount of competing interests which in turn lead to inevitable disputes and claims emerging between the diverse players in the field.

So what happens if a claim is made against a Maltese registered vessel or against a vessel that is present within the territorial waters of Malta?

The answer to this question is usually a simple, yet at the same time, complex one – Warrants of Arrest. Just like human beings, vessels can also be “arrested”. This generally happens in order to secure debts or claims, whether in personam (against an individual or company) or in rem (against the vessel itself), which could be frustrated by the departure of the vessel in question.

An arrest of a vessel under Maltese Law takes place through the issuance by the Court of a warrant of arrest on any one of the grounds listed in Article 742B of the Maltese Code of Organisation and Civil Procedure, which include, amongst others, claims relating to the possession or ownership of a ship, claims relating to damages to property, claims relating to loss of life or personal injury and claims in respect of pollution and collision incidents. 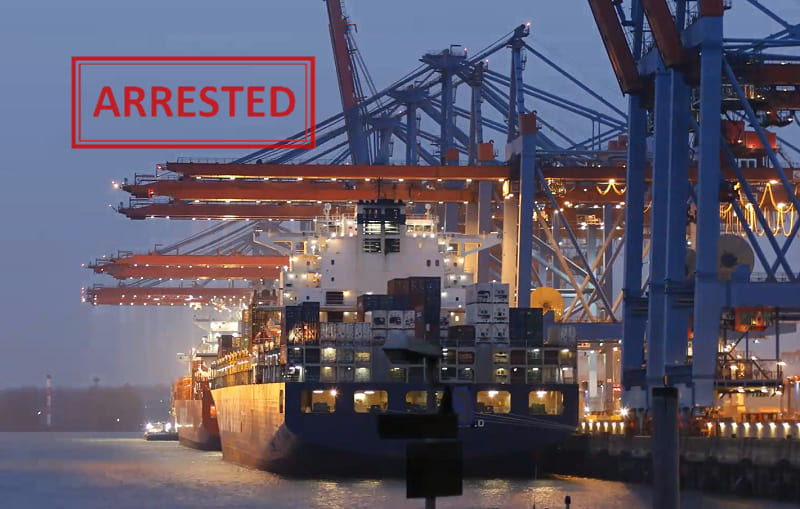 Which vessels can be arrested?

As mentioned above, a vessel is arrested in order to secure claims instituted either in personam or in rem. Thus, in a nutshell, vessels can be arrested when they are physically present within the territorial jurisdiction of Malta (that is within 12 nautical miles from the coast of Malta measured from low-water mark on the method of straight baselines joining appropriate points) for claims against the vessels themselves or the shipowning company, beneficial owner or the bareboat charterer. Moreover, vessels can also be arrested in respect of arbitration proceedings instituted against the shipowner or in cases where the Courts of another Member State have jurisdiction over the substance of the matter at hand. However, in all of these cases, an arrest of a vessel can only be done through the issuance of a warrant of arrest by our Courts.

Which vessels cannot be arrested?

Ships of war, vessels wholly chartered in the service of the Government of Malta or employed in any postal service, either by the Maltese Government or by any other government cannot be subject to a warrant of arrest under Maltese Law.

What are the requirements in order for a ship to be arrested?

Interestingly enough, there are only two requirements that need to be present in order for a vessel to be arrested. These are the following:

What happens when a warrant of arrest is issued against a vessel?

First and foremost, when the Court issues a warrant of arrest against a vessel, this is served on the relevant local authorities as well as on the master of the arrested ship whilst the relevant ship certificates  are seized from onboard and deposited in Court. Furthermore, from that moment on, the vessel shall be refused clearance by the competent authorities to leave Maltese territorial waters.

Can a warrant of arrest be contested?

Yes, a warrant of arrest issued against a vessel can be contested, and this through the filing of an application seeking the lifting of the arrest. This is requested in cases where for example the arrest is unlawful, unjustified or if there exists a procedural defect in the original warrant of arrest.

How is a vessel released from a warrant of arrest?

An arrested vessel, through its legal representatives, will have to file an application in Court requesting the release of the same from arrest. This request will have to be substantiated by a valid reason, such as the payment of the claim, the deposit of the claim amount in Court or the setting up of an adequate security, which can take the form of a bank guarantee or, upon agreement between the parties, a letter of undertaking issued by the P&I Club of the vessel subjected to the arrest. If the Court deems that the security in place is sufficient and in order, then it will proceed to rescind the warrant of arrest.

What happens after a warrant of arrest is lifted?

Following the lifting of an arrest, legal action on the merits of the claim or dispute in question has to be brought before the Maltese Courts within the term of 20 days from the date of issue of the warrant of arrest. Following such action, legal proceedings before the Maltese Courts will then take their course in order for a final judgment to be delivered in respect of the claim brought forward.

Disclaimer: This article is not intended to impart legal advice and should not be acted upon as such.

We use cookies on our website to give you the most relevant experience by remembering your preferences and repeat visits. By clicking “Accept All”, you consent to the use of ALL the cookies. However, you may visit "Cookie Settings" to provide a controlled consent.
Cookie SettingsAccept All
Manage consent

This website uses cookies to improve your experience while you navigate through the website. Out of these, the cookies that are categorized as necessary are stored on your browser as they are essential for the working of basic functionalities of the website. We also use third-party cookies that help us analyze and understand how you use this website. These cookies will be stored in your browser only with your consent. You also have the option to opt-out of these cookies. But opting out of some of these cookies may affect your browsing experience.
Necessary Always Enabled
Necessary cookies are absolutely essential for the website to function properly. These cookies ensure basic functionalities and security features of the website, anonymously.
Functional
Functional cookies help to perform certain functionalities like sharing the content of the website on social media platforms, collect feedbacks, and other third-party features.
Performance
Performance cookies are used to understand and analyze the key performance indexes of the website which helps in delivering a better user experience for the visitors.
Analytics
Analytical cookies are used to understand how visitors interact with the website. These cookies help provide information on metrics the number of visitors, bounce rate, traffic source, etc.
Advertisement
Advertisement cookies are used to provide visitors with relevant ads and marketing campaigns. These cookies track visitors across websites and collect information to provide customized ads.
Others
Other uncategorized cookies are those that are being analyzed and have not been classified into a category as yet.
SAVE & ACCEPT
98fab86012f37e6805ddad33592f0ab6.js
× Chat with us